CW: This post contains discussion of food, activity, and weight. Sensitive readers might prefer to skip it.

Science tells me that regular, moderate physical activity is good for my body. And though I believe this science to be valid, I have never been able to embrace exercise for the sake of exercise. I’ve never kept up a regular schedule of walking, and forget running. Never gonna happen. I’ve occasionally dabbled with hand weights, but never stuck with anything for more than a fortnight, let alone a gym membership and actual weight machines.

I know that an exercise regimen would be good for me if only I could build one, but I’ve accepted that this way lies frustration and disappointment for me, and who wants more of that? Definitely not this girl. Fuck that noise.

The only way I’ve ever been successful at maintaining the regular, moderate physical activity that helps my body function well is to build it into the things I’m doing anyway–make walking or cycling part of my commute and my errands, park further away from my destination when I do drive, cycle or walk with friends as a social activity, tend a garden, stack/tote/haul firewood, shovel snow.

Living in Arlington, I had managed to build enough walking into my commute and errands, that I was routinely clocking 10,000 steps a day, the number most health tracking systems use as a default goal, without feeling like I was making any extra effort to do so, and my body felt good.

Well, that was true in the Beforetimes. The pandemic stopped me in my tracks as campus closure and lockdown measures meant I was communing across the room instead of across town, and revamping my teaching for the remote modality meant spending more than 40 hours a week in my desk chair.

Like many people, I put on weight over the course of 2020. Unlike some, I was mostly able to maintain a body-positive attitude toward it. Comfort food, red wine, chocolate, and a sedentary life are perfectly normal ways to cope with the stress of a pandemic (and an international move), and 15 extra pounds is a perfectly normal result of that coping. Because I have Hashimoto’s thyroiditis and have gained and lost weight several times in my adult life, my wardrobe is ready for moments like this, and I just pulled out the boxes of next larger clothes.

But my body also felt less good. I knew that what I needed was to be moving more, but I also knew that trying to embrace some kind of regimen would be an exercise only in futility.

Then I arrived in Moscow. This is a city designed for pedestrians, and most people here count walking as both a hobby and a means of locomotion. Public transportation–subway, buses, trolleys, trams, and commuter trains–permeate the city, run frequently, and have reasonable flat-rate fares, so people will walk at each end of a transit ride rather than taking a taxi for 5-8 times the price. The local maps app gives very detailed walking directions that include shortcuts and note the number of staircases. Not owning a car is not weird here, and I love that.

The Gallery is less than a mile from several metro stations, each of which contains platforms for multiple train lines, and both east-west busses and north-south trams and trolleys stop about a block away. This kind of proximity to multiple forms of transit is not at all unusual in the city center.

Two days a week, my commute looks like this:

After a 20 minute walk to Metro Kurskaya, I take the blue line 4 stops and then get on university shuttle. Kurskaya is not the closest metro station, but it’s the one that means I don’t have to transfer to a different line, so I walk a little extra. This commute includes 4 staircases (2 down, 2 up) in pedestrian subwalks and inside metro stations. Most days, it also includes standing on an already crowded train, which is more of a core workout than you might guess.

A couple weeks ago, I got curious about the number of steps I am logging by the time I get to my office. The answer is just over 2000, according to the step counter in my watch (see the inner half circle of numbers and the tail of the hands in the featured image above).

Once on campus at NES, I do less walking than I did at Marymount–the classrooms are smaller, and the campus is much more compact–so I’m not hitting 10,000 steps on a regular work day. But I am, in the regular course of my life, moving more than I have been for the last eighteen months. Groceries are a short stroll down the block, but buying pet supplies and farmers’ market produce each involve 20-minute walks, as does my one-day-a-week commute to NES’s other campus. And my body is starting to be less unhappy with me.

There’s no bathroom scale in The Gallery, but my clothes are looser, so some of my pandemic weight is coming off. 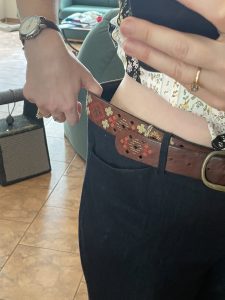 Now I just need the crate shipment holding all my boxes of clothes in different sizes to arrive. We packed it August 10th, its cargo ship arrived in Bremen this week, and it should be on a truck from Berlin to Moscow soon. If I tighten that belt any further, these trousers bunch awkwardly, so I’ll just keep periodically hitching them up as I continue walking.

Many Americans feel trapped without a car, and this is not surprising given the vast swathes of the U. S. that are unconnected to public transportation of any kind, but they bring this feeling with them to places like Moscow where conditions are not the same. Without a car, I feel unencumbered and powerful. I can get myself where I need to go and gather the necessities of life on my own two feet.

And, just by commuting as I’ve chosen to, I can log 2000 steps before elevenses, and it doesn’t even seem like exercise.