Where are the gates, actually?

My bus/tram/trolley stop is Покровские ворота (Pokrovski’e vorota, Pokrovsky Gates), and I would like to know where the gates are please.

Because there are no gates visible. None whatsoever at the intersection or in a one-block radius around it. This is false advertising.

There are other nearby stops with “gates” in the name, too, and they similarly lack any discernible gates of any sort.

So I did some reading.

Moscow is a city built in concentric (semi-)circles (some circles are interrupted by the Moscow river). For centuries, each new circle of expansion included fortifications for defense. The earliest forms were earthen works and wooden structure, but these were eventually superseded by masonry walls with gates. The oldest part of the city is, of course, Moscow’s Kremlin, which still has its walls, and still keeps its gates mostly closed. 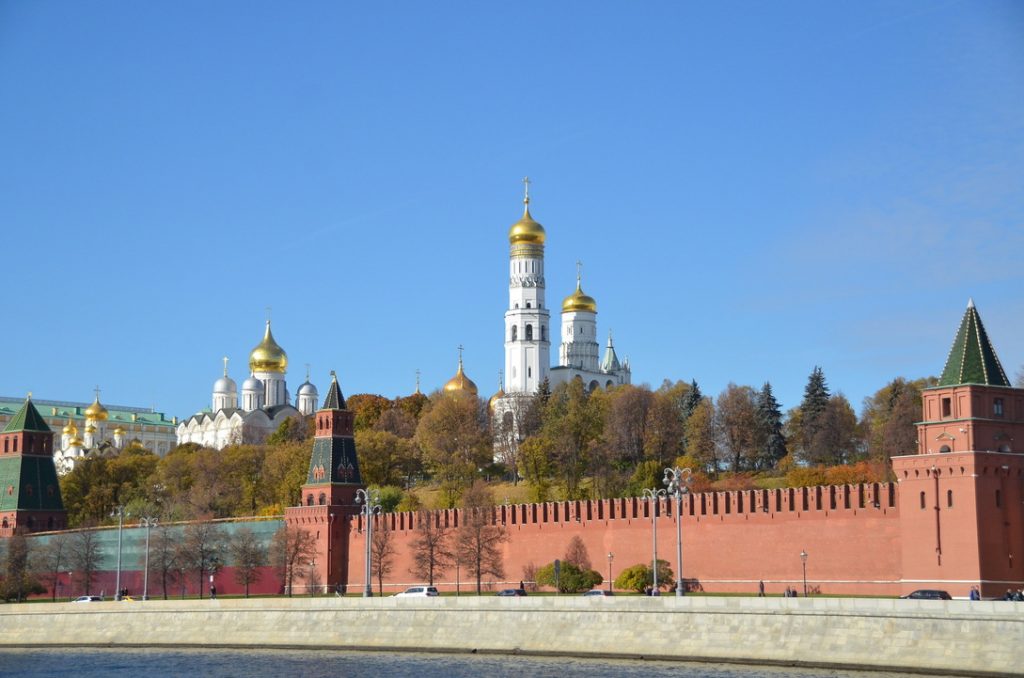 On a side note, kremlin is the anglicization of the Russian word кремль (kreml’), which means citadel, or a fortified space that is also a seat of governmental power. Other Russian cities also have kremlins. In Novgorod, for example, the kremlin’s gates are open to the public, and it functions as a pedestrian thoroughfare at the heart of the city, connecting different neighborhoods.

Moscow dates its founding as a settlement to 856 CE, but the earliest wooden fortification at the city center was built in 1154 CE, and the word kreml’ is thought to have first been used in the 14th century (Bridge to Moscow). The current walls date to the late C15th CE, while the structures within have a variety of cornerstone dates.

The next fortification outside the Kremlin formed Китай город (Kitaj gorod), or the Walled City, whose walls were built in the early C16th CE (Zaryadye). These walls no longer exist the way the kremlin’s walls do, but pieces of these red brick walls are still visible in the buildings in that area. 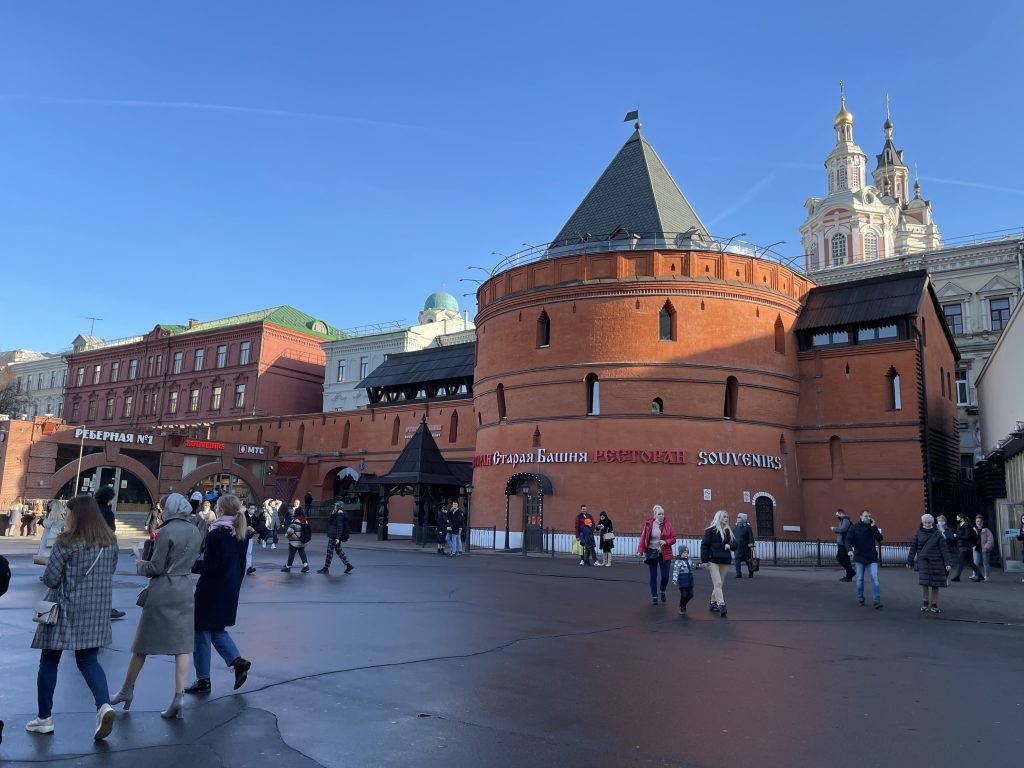 There are even some archways, where gates once were, and, therefore, in that part of town, I was not surprised to find transit stops named after currently-missing gates. 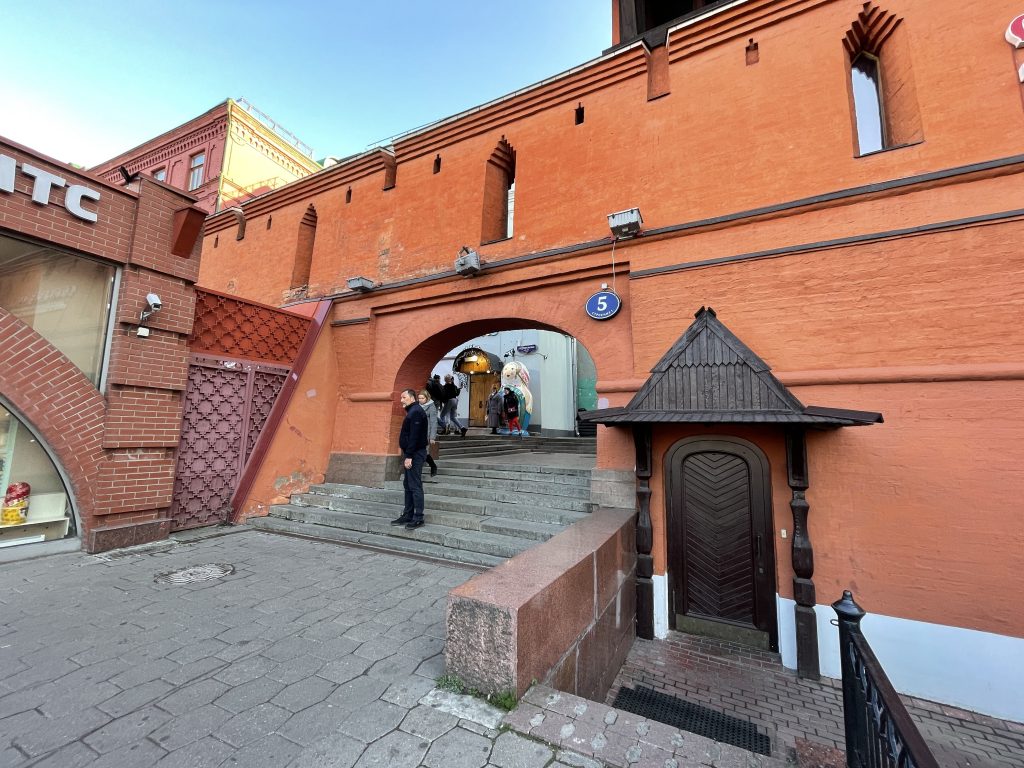 But the missing Pokrovski’e vorota  are too far east to have been part of the Kitaj gorod wall. While reading about Moscow’s Boulevard Ring, on which I live, I learned that prior to the development of the connected boulevards in the 18th and 19th centuries CE, this semicircular space was occupied by limestone fortifications forming the Белый город (Belij gorod, White City). Unlike the walls of Kitaj gorod, which had been incorporated into the structures of that part of the city while standing, the white walls were demolished and the materials repurposed.

Between my apartment and the downtown campus I teach on, I pass one of the few remaining places where any remnant of this fortification is visible. 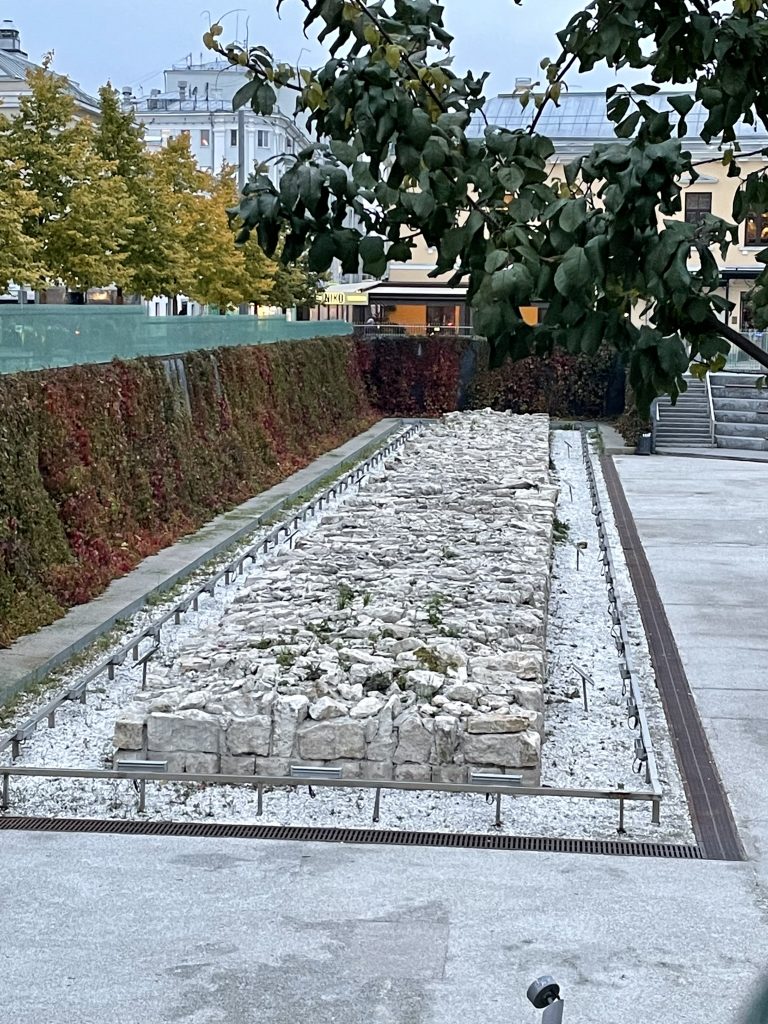 At the base of this small amphitheater, the white walls’  foundations  remain. The space is fenced off, and I have not seen how it gets used, but I can’t imagine that uneven surface as a stage, only a backdrop.

Demolition of the walls that included the Pokrovski’e vorota began in the late eighteenth century, when Catherine the Great was still empress. That’s a very long time before now.

Not only are there no gates in the present. There have not been gates at that intersection for at least 200 years. And yet, the name persists.

For two centuries, from the Russian Empire to the Soviet Union to the Commonwealth of Independent States to the Russian Federation, this name for this intersection has stuck. In contrast, over the same time span, Sankt-Peterburg became Petrograd (during WWI), then Leningrad (after his death), then returned to its original name (after the fall of the USSR), and other cities, parks, and streets have had a similar progression of names. It’s remarkable that the Pokrovski’e vorota have had such staying power.

They’re not alone, of course. Along the Boulevard Ring, and the Garden Ring, the next further concentric circle, there are other similar transit stops named for no-longer-existent gates.

In part this has to do with scale. The changing name of St. Petersburg was a political choice, marking a break from previous alliances and values. When the empire went to battle with Germany in the first world war, they could not have a capitol with a German-sounding name Sankt-Peterburg had to go, and Petrograd is a name built on Slavic roots. This was as much an outward statement as an internal one, a repudiation of the long-standing relationship between the Russian Empire and the Germans. An intersection named after demolished gates just doesn’t rise to the same level.

It is the obscurity of these spaces, their invisibility on a map of the world, their everydayness that allows the names to persist. Changing the name is not an outward symbol. The world isn’t paying attention to my transit stop.

The people who live here are  paying attention, though. The name persists because we keep saying it out loud to one another, like an irregular verb. Continued use teaches each new generation of Muscovites, and incomers like me, the association of the space with the name despite the lack of any physical gates at all.

This intersection is a liminal space, Chistoprudnij bulvar’ becomes Pokrovskij bulvar’, and the gates stand only in our words.